Congressman Heck Denounces Trump in Las Vegas, Then Turns Around and Hands Out Trump Stickers in Ely

Las Vegas, NV – A day after Congressman Heck stuck by his unendorsement in the Senate debate, Congressman Heck went to rural Nevada and handed out Trump bumper stickers. So what is it, Congressman? Do you still support a racist, misogynistic, xenophobe for President or have you unendorsed him in an attempt to save your own campaign? 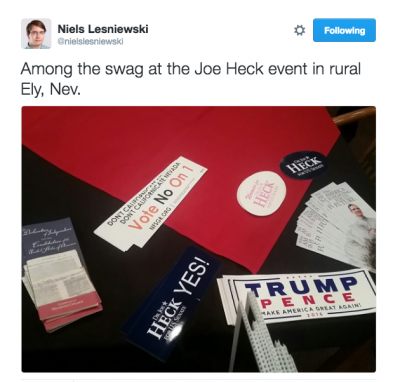 It’s been a whirlwind week for Congressman Heck and Donald Trump. Heck’s unendorsement of Donald Trump was not well received by Republican voters in Nevada last Saturday. Heck went radio silent all week, while conservative voters and talk radio hosts ripped him apart on talk radio. On Wednesday, Trump campaign managerKellyanne Conway said Heck was back on the Trump train, but at Friday’s debate, Heck said he is sticking by his unendorsement. Yet not even 24 hours later, Heck is campaigning with Trump bumper stickers in rural Nevada.

“This is the definition of political expediency – Congressman Heck unendorsed Donald Trump when he thought it would hurt his own campaign, but he still wants Trump supporters to vote for him,” said Mairead Lynn, spokesperson for the Nevada Democratic Party. “On Friday, Congressman Heck reaffirmed his withdrawal of his support for Donald Trump and on Saturday, he’s handing out Trump stickers. This is a craven attempt to save his political career and Nevada voters will see right through it.”